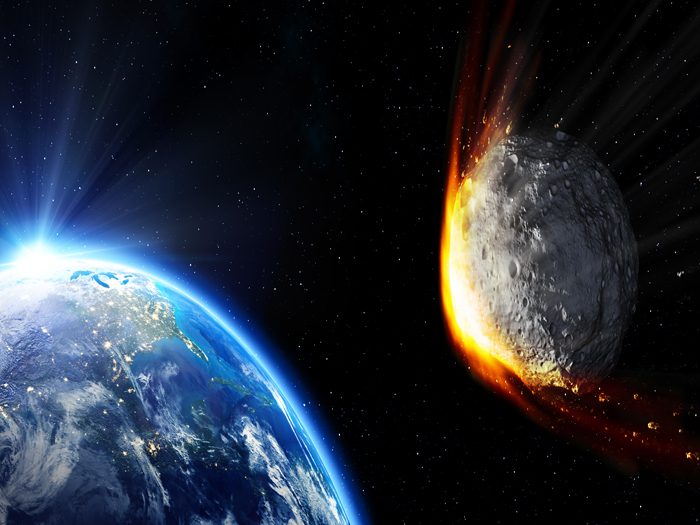 Nearly three miles above New York City, an asteroid bursts with the force of 1,000 A-bombs.

For people on the ground, it looks like a second sun is breaking right above them. The heat from the fire is enough to cause third-degree burns and ignite clothing 19 miles around the site of the blast. At the detonation site, people will be subject to incendiary heat, 500 mph winds, and — at 105 decibels — the loudest sounds most people have ever heard.

Now this scenario didn’t actually happen. These figures come from a scenario Risk & Insurance® imagined for our 2013 Black Swan Issue. In that story, we looked at the effects that an asteroid hitting New York City would have on the city and the insurance industry.

And the findings were grim. According to a 2009 RMS report, an asteroid breaking above New York City would cause property losses of about $1.19 trillion and it would cause 3.2 million deaths and 3.76 million injuries.

On July 25, an asteroid known as Asteroid 2019 OK got eerily close to making our imagined scenario a reality. According to the Washington Post, the giant meteorite blindsided astronomers when it got “uncomfortably close” to Earth.

Melbourne-based astronomer Michael Brown told the Washington Post that had Asteroid 2019 OK made contact with Earth “it would have gone off like a very large nuclear weapon.”

“It shook me out my morning complacency,” he said. “It’s probably the largest asteroid to pass this close to Earth in quite a number of years.”

Astronomer and Lead Scientist at the Royal Institute of Australia Alan Duffy had a similar reaction.

“This was a true shock,” he told the Washington Post. “It’s not a Hollywood movie. It is a clear and present danger.”

The asteroid was able to sneak up on scientists due to its size, speed and “eccentric orbit,” which takes it from within Venus’ orbit to beyond Mars. As a result, the meteoroid isn’t detectable from Earth for long.

“It’s faint for a long time,” said Brown. “With a week or two to go, it’s getting bright enough to detect, but someone needs to look in the right spot. Once it’s finally recognized, then things happen quickly, but this thing’s approaching quickly so we only sort of knew about it very soon before the flyby.”

Asteroid 2019 OK isn’t the only giant meteor to fly within the vicinity of Earth this summer. Asteroid 2006 QQ23 is set to zoom by the planet August 10, according to CNN.

The 1,870 foot rock is larger than the Empire State building and would cause significant damage if it struck the planet. Fortunately, unlike Asteroid 2019 OK, this meteoroid is being tracked by scientists at NASA who say the rock is nearly 5 million miles away.

To read more about catastrophe, check out our June 2019 issue which covers everything from the costs of catastrophe to the ways in which resiliency approaches can help when natural catastrophes cause uninsured losses.

If you’re looking for more Black Swan scenarios, you can read about what would happen if a mega-tsunami struck the east coast, the damage a viral outbreak of influenza could cause, and others here. & For Brett Dahl, education in the risk management profession is better than ever, but more can be done to promote this exciting career.